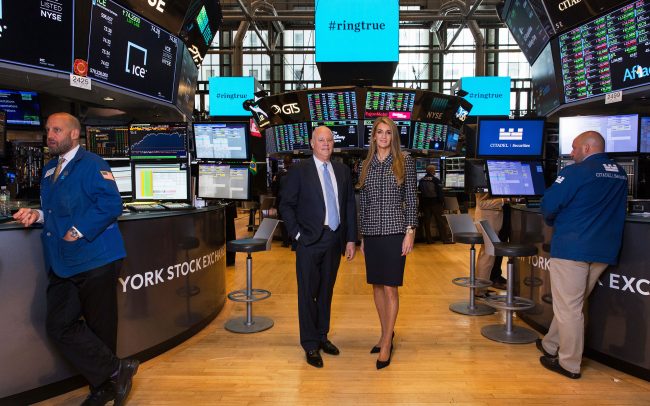 Jeff Sprecher, Intercontinental Exchange chairman and CEO, with his wife Kelly Loeffler, an ICE executive who will be CEO of the startup Bakkt, on the trading floor of the NYSE on July 9, 2018

A rash of crypto-related announcements over the past few weeks has added fresh impetus to the narrative surrounding a gradual convergence of crypto and traditional assets. Of course, both types of assets continue to be quoted (and one could argue, denominated) in fiat currency terms, in particular the US Dollar, but that is another story altogether…

The three situations below gives a sense that dreams of a fully digital future are starting to take shape as blockchain and distributed ledger technology adoption within the financial services space appears to gain more traction.

In the US, Intercontinental Exchange – the trading colossus that owns the New York Stock Exchange and other global marketplaces – announced the formation of a new company called Bakkt, which will launch in November 2018. The stated mission of Bakkt is to transform Bitcoin into a trusted global currency, and this starts by offering a federally regulated market for Bitcoin.

2. SAFE Notes on Security Tokens; for Trade Finance on Blockchain

Also in the US was the capital raise mechianism for t0.com (or tZERO””), a distributed ledger platform for capital markets that is majority owned by Overstock.com, Inc (NASDAQ: OSTK). tZERO provides a modular and adaptable blockchain-based platform that integrates with trade participants to create a real-time, authenticated, immutable ledger. This enables pre-trade clearance, enhanced trade FIX, and better post-trade clearing and reconciliation. Overstock.com will be a the launch client for tZERO and provide access to Overstock’s invoices, payable and receivables.

3. On the horizon: Security Tokens in Singapore

Closer to home, the Singapore fintech startup Rate raised USD 15M (ETH 25K) via a token sale.  Rate will use proceeds to build out the Rate3 platform, which provides tokenisation of traditional assets – in short, tools to create security tokens.

So what does this all mean?  Or in the almost immortal words of No Mercy “Where Do You Go“?

I would posit that tryb needs to take a deeper look at crypto/blockchain/DLT opportunities that are truly transformative. Yet, these are not the easiest opportunities to identify as we try to (as we say internally) stay out of the weeds.  I suggest keeping some guidelines in mind when assessing transformative technology investments:

This post was written by Veiverne Yuen, Co-Founder of tryb.